Executive summary: Beyond the Bomb

Beyond the bomb: global exclusion of nuclear weapon producers 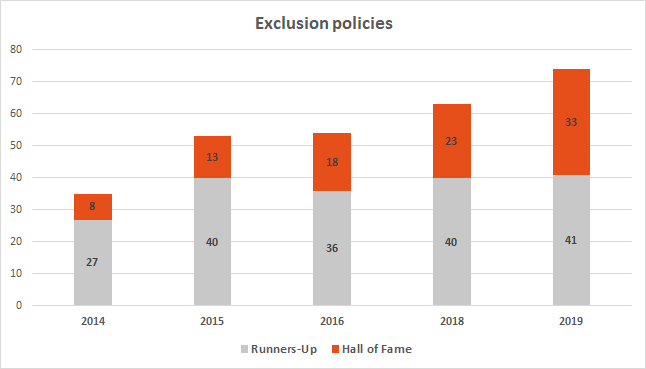 5 institutions have moved up from the Runners-Up. These institutions were moved up after an implementation check found they no longer have any financial relations with identified nuclear weapon producers.

Investments are not neutral. Financing and investing are active choices, based on a clear assessment of a company and its plans. Financial institutions, by adopting public policies prohibiting investment in the nuclear weapons industry, actively demonstrate the stigma associated with these weapons of mass destruction. We hope the Hall of Fame will be inspirational to many more financial institutions.

The Runners-Up section highlights another 41 financial institutions that have taken the step to exclude nuclear weapon producers from their investments, but whose policy is not all-inclusive in preventing all types of financial involvement with nuclear weapon companies. This is one more compared to the 40 institutions profiled last year. The financial institutions in the Runners-Up are based in Belgium, Canada, Denmark, France, Germany, Italy, Luxembourg, the Netherlands, New Zealand, Norway, Spain, Sweden, Switzerland, the United Kingdom and the United States.

2 institutions are completely new to the report: Domini (United States) and Deutsche Bank (Germany). One financial institution was moved from the Hall of Fame to the Runners-Up. Pension fund AP7 (Sweden) has a comprehensive policy that was listed in the Hall of Fame of previous reports. However, an implementation check found that they hold shares in one of the identified nuclear weapon producers.

The Runners-up category is necessarily broad. Financial institutions included range from those with policies nearly eligible for the Hall of Fame, to those with policies that still allow considerable sums of money to be invested in nuclear weapon producers. They are therefore ranked on a four-star scale to illustrate the comprehensiveness of their policies. One-star policies are included to demonstrate that there is a wide and ongoing debate among financial institutions when it comes to including nuclear weapons association criteria in their socially responsible investment standards. However diverse these policies, they all express a shared understanding that involvement in nuclear weapons production is controversial.

The identification of policies for inclusion in this report is based on peer recommendations. The report does not claim to represent an analysis of all financial institution policies on weapons, rather it provides a snapshot. Those in a position to recommend additional policies for inclusion are invited to do so. With a significant percentage of new wealth seeking investment in funds with strong environmental, social and governance criteria, along with the anticipated Entry Into Force of the Treaty on the Prohibition of Nuclear Weapons, it can be estimated that the number of policies excluding nuclear weapon producers will grow significantly over the coming years.

Maaike Beenes works for the humanitarian disarmament program for PAX in the Netherlands. She researches investments by financial institutions in producers of controversial weapons, notably nuclear weapons and cluster munitions, and is co-author of the reports ‘Don’t Bank on the Bomb’ and ‘Worldwide Investments in Cluster Munitions’. As part of the Don’t Bank on the Bomb campaign of PAX and ICAN, she works together with campaigners around the world to hold banks and other investors accountable for their investments in nuclear and other controversial weapons. She was involved in the negotiations for the Treaty on the Prohibition on Nuclear Weapons on behalf of PAX and ICAN.
Related Posts

Want to join the discussion?
Feel free to contribute!