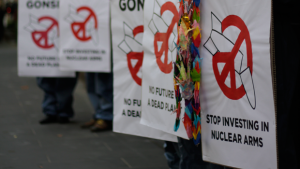 There is now a super majority of support for the package of legislation in the New York City Council introduced on nuclear weapons (Res. No. 976 and Int. No. 1621). Introduced by City Council Member Daniel Dromm and overwhelmingly supported by New York City residents, the vote is yet to be scheduled.

Support was expressed during a hours of public testimony on 28 January, featuring statements from more than 60 persons and receiving written testimony another 70.

Once passed, these bills would:

New York City has had a major role in the nuclear weapons industry (hence why they called it The Manhattan Project). At the same time, however, there is an inspiring history of New Yorkers opposing nuclear weapons over the last 70-plus years. For example, John Hersey’s Hiroshima first appeared in The New Yorker magazine in 1946. In 1955, the Norman Cousins brought 25 atomic bomb survivors from Japan, The Hiroshima Maidens, to Mount Sinai Hospital in Manhattan for reconstructive surgeries. Decades later, the landmark 1982 Central Park protest brought over one million people to the streets to demand nuclear disarmament.

It is in continuing to address this legacy that this New York City package of bills can be especially meaningful. With divestment as a centerpiece of this legislation and an advisory committee that will include activists, academics, and hibakusha, these bills have the potential to both raise awareness and effectuate real change in policy in one of the world’s most geopolitically significant metropolitan areas.

Check out the NYCDivest.org page for more information, or watch the recording of the hearing here.

How can I get my city involved?

Check the City Guide to Divestment

What are other cities doing?

On 28 January the New York City Council is holding a hearing on a package of legislation- joint hearing on Res. No. 976 and Int. No. 1621. The package of legislation represents a clear movement from the conceptualization of nuclear weapons in the Manhattan Project to finally banning the bomb by supporting the Treaty on the Prohibition of Nuclear Weapons. It also calls on NYC to divest all of it’s pension funds from any company associated with the production of nuclear weapons. END_OF_DOCUMENT_TOKEN_TO_BE_REPLACED

A city guide to divestment

Divesting from producers of controversial weapons: a guide for local authorities…

On 18 June 2019, the city of Santa Barbara, California officially endorsed the Treaty on the Prohibition of Nuclear Weapons (UN Ban Treaty) and voiced its opposition to the investment of city resources in companies associated with nuclear weapon production.