Research shows at least at least US$ 116 billion (€ 102 billion) in contracts between governments and private companies in France, India, Italy, the Netherlands, United Kingdom, and the United States for production, development and stockpiling of nuclear weapons. State owned companies in China connected to nuclear weapon production are starting to raise money through bond issuances, while Israeli, Pakistani, North Korean, and Russian nuclear programmes are still not transparent.

Most of companies are involved in the US arsenal, as the contracting system in the US is quite transparent. However, there is also information available on companies connected to the French, Indian and UK arsenals. In reviewing the analysis, you’ll find brief profiles of other companies, including a Chinese company, whose nuclear weapon related activities are outside the scope of the research but are still relevant while painting the picture of the global nuclear weapons industry.

This is the first time a Chinese company has been included. China National Nuclear Corporation is outside the general scope of this research (it is state owned), as they have recently done a bond issuance, some information is included to draw attention to the growing transparency and interconnectivity of even Chinese State-owned nuclear weapon associated companies.

There are a few companies that stand out in terms of their overall nuclear weapon related activities, with billions in outstanding contracts. For example, Huntington Ingalls Industries which is connected to several facilities in the US nuclear weapons enterprise, is part of more than US$ 28 billion in outstanding contracts. Lockheed Martin is a close runner-up, connected to more than US$ 25 billion in contracts.

Airplanes and submarines are outside the scope of the research. However, companies involved in producing airplanes and submarines designed to deliver nuclear weapons are often involved in other parts of nuclear weapon production. For example, Lockheed Martin, which is currently producing the F35 (Joint Strike Fighter), one variant of which will be certified to drop nuclear weapons, is included due to more than US$ 7.9 billion (€ 6.9 billion) in outstanding contracts for nuclear armed missiles for the US and UK. 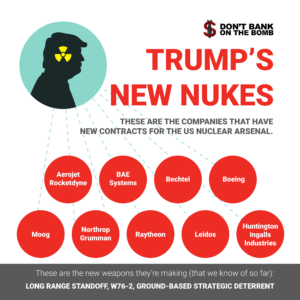 Despite global calls for restraint and nuclear disarmament, new nuclear weapons are being developed in all nuclear armed countries. The company profiles provide information about a few new types of weapons, including the US Ground Based Strategic Deterrent and Long-Range Standoff weapons, the French ASMPA-successor the ASN4G, and the Indian efforts to expand to submarine launched ballistic missiles. In addition, efforts to build hypersonic submarine launched ballistic missile capabilities, like those planned in a US$ 109.5 million (€ 95.9 million) contract with the Charles Stark Draper Laboratory, are discussed.

Some of the lower yield weapon options outlined in the 2018 US Nuclear Posture Review are also now under development. For example, the US National Nuclear Security Administration has started building the first low-yield, submarine-launched ballistic missile warhead W76-2, at the Pantex Plant in Texas. The conversion of W76-1 warheads into W76-2 warheads will cost a minimum of US$ 125 million (€ 110.1 million).1 The private contractors involved in this work are part of Consolidated Nuclear Services LLC (CNS), a Bechtel -led joint venture including Leidos, ATK Launch Systems (now part of Northrop Grumman), SOC, and Booz Allen Hamilton 2 as a teaming subcontractor.3

Many of the outstanding contracts identified in this report were granted around 2015 and are set to expire in 2020. However, some nuclear weapon associated contracts were awarded with much longer time frames in mind. For example, a contract for a key component necessary to launch US Intercontinental Ballistic Missiles (ICBMs) was designed to keep the missiles ready to launch until at least 2075. Some Trident contracts are designed to keep the system fully functional until at least 2042. Generally, though, most contracts are arranged in five to ten-year increments, and are modified regularly to meet cost overruns, delivery delays and add-on projects. Contracts are constantly changing, and a contract that is initially set for one amount may be adjusted by an order of magnitude within a month.

In 2018, there were surprising contracts awarded that prepare the ground for future US fissile materials production. Ostensibly for Tritium extraction, the US$ 505 million (€ 427.5 million) contract awarded in September 2018 to a subsidiary of BWX Technologies was for activities described by the US government to “provide a reliable and economical source of unobligated enriched uranium”, free from peaceful use restrictions, until at least 2025.4

After years of complaints about the previous contractors, Huntington Ingalls Industries took over the management and operations for the Los Alamos National Laboratory in 2018 with a five-year contract estimated at US$ 2.5 billion (€ 2.2 billion) annually.5 However, the same contractors that have been previously reprimanded for poor performance, including BWX Technologies, remain in place at the Lawrence Livermore National Lab in California.

US nuclear weapons in Europe 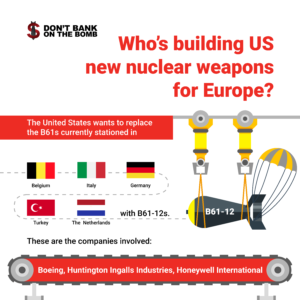 An estimated 180 B61 nuclear gravity bombs are currently deployed by the US at airbases in five European countries (Kleine Brogel AB in Belgium, Buechel AB in Germany, Aviano AB and Ghedi AB in Italy, Volkel AB in the Netherlands, and Incirlik AB in Turkey). Despite a majority of those populations objecting to this stationing, work is under way to replace the B61 bombs with a new version, the B61-12. The Federation of American Scientists reports, however, that there are 2-5 year delays on the B61-12 project as a whole, while new bomb plans (B61-13) are meant to start in 2038.6

Three of the contractors named in the report are involved in production activities for the B61-12. Boeing is producing the tail-kit assembly under a US$ 185 million (€ 163 million) contract. Honeywell International operates and manages the Sandia National Laboratory which designed the new hardware for the bomb, and Huntington Ingalls Industries provides nuclear operations and manufacturing. According to the contract terms, the Boeing designed B61-12 tail kits are meant to be ready by May 2019.7 These are the weapons the United States deploys outside their territory, it is yet unclear when the new bombs will be delivered to their European locations. Another company, Atlantic CommTech got a contract in 2016 to modernize the Weapon Storage and Security System at the hosting bases in Europe, but that work is only meant to conclude by October 2020.8

The new contracts, the new types of weapons, the new allocation of resources all show that the new nuclear arms race is happening. 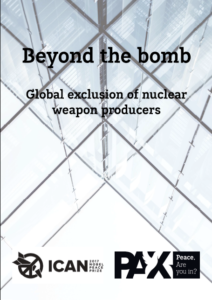 Who tries to profit from the bomb? 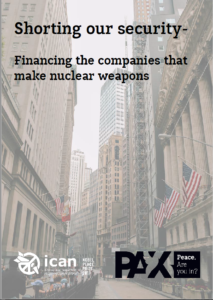 The companies behind the bomb 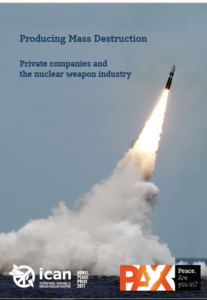 Don’t Bank on the Bomb

Since 2013, PAX has published the Don’t Bank on the Bomb report as a contribution to the International Campaign to Abolish Nuclear Weapons- ICAN

PAX works together with committed citizens and partners to protect civilians against acts of war, to end armed violence, and to build a just peace. www.paxforpeace.nl

Permission is granted for non-commercial reproduction, copying, distribution, and transmission of this publication or parts thereof so long as full credit is given to the coordinating project organization (PAX), editor (Snyder), and relevant authors (Beenes | Snyder); the text is not altered, transformed, or built upon; and for any reuse or distribution, these terms are made clear to others.