NPT based exclusions, get ready for an update!

Many financial institutions exclude nuclear weapon producers and specifically cite the nuclear Non Proliferation Treaty (NPT). With the projected entry into force of the Treaty on the Prohibition of Nuclear Weapons (TPNW) in 2020, it’s time to update these policies. 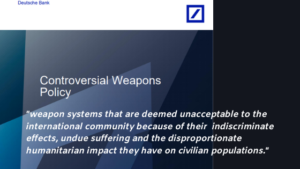 Pretty clear, until you reach the NPT caveat.

About a dozen financial institutions with nuclear weapon exclusion policies identified by the Don’t Bank on the Bomb project take the position that the NPT allows five countries to retain nuclear weapons indefinitely.

This interpretation of international law is misleading. The NPT requires all of its member countries to “to pursue negotiations in good faith on effective measures relating to cessation of the nuclear arms race at an early date and to nuclear disarmament”.

Nowhere in the treaty does it say that these countries may retain their nuclear weapons indefinitely, and financial institutions citing the NPT should be clear on what the treaty itself calls for.

Financial institutions like BBVA should seize the opportunity before the Treaty on the Prohibition of Nuclear Weapons enters into force to revise their defence policy. Currently, BBVA says that nuclear weapons “are considered controversial due to their potential impact on civilians and their indiscriminate nature, but they are not prohibited under international law.”

Other countries took up their responsibility to negotiate nuclear disarmament under the NPT very seriously, and concluded negotiations on the first comprehensive nuclear weapon prohibition in 2017.

But, the NPT doesn’t require only the nuclear armed countries to do this type of negotiation, and other countries are demonstrating efforts to implement these commitments. In reflecting on their efforts, a handful of countries said “It is generally accepted that the full implementation of article VI requires a legally binding norm to prohibit nuclear weapons, since otherwise a world free of nuclear weapons cannot be achieved nor maintained. A prohibition of use alone would not be particularly insufficient for nuclear weapons in the light of the risks inherent in them, as well as the systems connected to them. The prohibition itself, of course, only represents a step, which will need to be followed by further steps to achieve the ultimate goal of a world free of nuclear weapons.”

The financial institutions that don’t invest in controversial weapons generally, but make this odd excuse for nuclear weapons should take note, and exercise their influence in shaping a world free of the worst weapons ever created by eliminating these caveats. As of the beginning of January, only 16 more countries must ratify the Treaty on the Prohibition of Nuclear Weapons for it to become binding international law, and from that moment forward, the excuse that nuclear weapons are not illegal will no longer serve.

Susi Snyder coordinates the research, publication and campaigning activities surrounding the Don’t Bank on the Bomb report. She is an International Steering Group member of the International Campaign to Abolish Nuclear Weapons, and a 2016 Nuclear Free Future Award Laureate. Previously, Mrs. Snyder served as the Secretary General of the Women's International League for Peace and Freedom at their Geneva secretariat.
Related Posts

Open letter to index providers on controversial we...

Controversial weapons vs the SDGs

Want to join the discussion?
Feel free to contribute!